Stephen Curry has been the face of the franchise for years, and now his contract breakdown is giving fans a glimpse into how he’s earned that position. 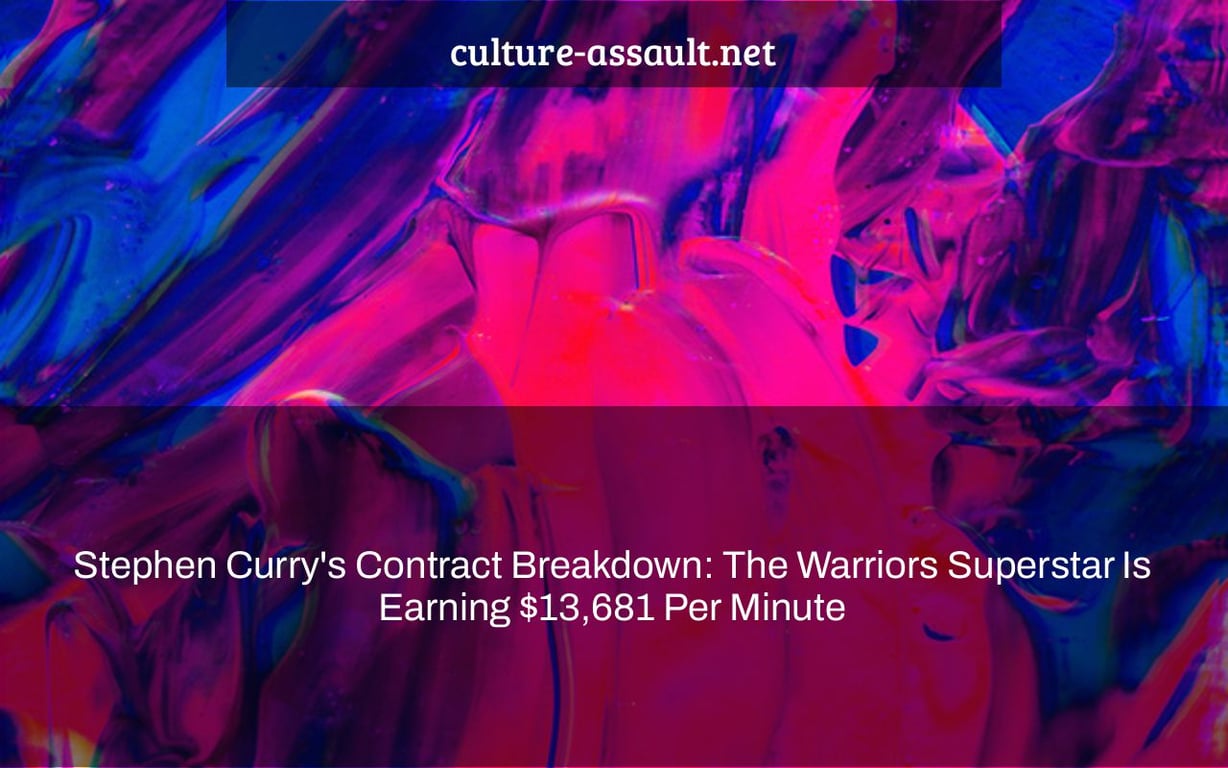 Steph Curry became one of the highest-paid players in the NBA when he signed a four-year, $215 million contract deal. Curry deserves the money, even if it seems to be a lot. He was a key part of the Warriors’ five-year run to the NBA Finals, during which they won three titles. He was also the captain of the 73-win club that established the league record for victories.

When Curry started to play like one of the greatest, the Warriors’ market value skyrocketed. The top players are entitled to the biggest compensation since they maximize income. That being said, it’s a substantial sum of money, particularly when broken down to the second.

Steph Curry’s deal is broken down below.

Curry’s current deal pays him $48 million for the next season. In his last season, that figure will rise to $51 million, $54 million, and $59 million. Curry will earn approximately $60 million when he is 37 years old. Curry can get so much with this deal.

Curry might be on his way to purchasing the world’s most costly private airplane. The cheapest plane costs about $2 million, so Curry could purchase 100 of them at that price. The most pressing issue is what he will do once he retires from basketball. Curry earned “less” money than Dwyane Wade, who invested in the Utah Jazz. Could Curry stay with the Warriors once he retires and purchase a piece of the team?

Since the 2017-2018 season, Curry has earned at least $30 million. He’s been generating a lot of money for a long time, so this high figure shouldn’t come as a surprise. Curry might make an offer for the L’Incomparable Diamond Necklace, which is valued at $55 million on the US market, at the conclusion of a season. He could spend $53 million for a 1963 Ferrari GTO.

Curry has previously been spotted wearing bling. He could purchase two $25 million 201-carat diamond watches with his wages. Maybe even by the $16 million domain “insure.com.” These acquisitions are unlikely to take place. It’s also insane that some of these goods are so expensive to begin with.

Curry could purchase a boat after only one game. A boat may cost anywhere from $500,000 and $10 million on average. If he saved enough a fourth of the way through the season, he could purchase a boat like Dallas Cowboys owner Jerry Jones. He could also buy the world’s most expensive bathtub, a 20,000-pound Amazonian crystal stone tub for roughly $800,000.

There was a time when a panda could be leased for $1 million. Curry could afford one of the world’s most endangered animals after only two games. It’s incredible that you can afford this much money.

The cost of a floating magnetic bed is around $1.6 million. Curry may be napping in the air after a few quarters. He could even play a quarter of basketball and earn the same amount as some corporate executives do in a year. He could live comfortably if he just played a quarter of basketball. Comfort is the crucial term, not living in a palace with everything at your fingers.

Curry’s quarterly compensation is almost the same as the most expensive set of headphones, which is a fun statistic. Tournaire’s Focal Utopia costs roughly $120,000. Another explanation is why these headphones are so expensive. It makes no difference to Curry. He’ll be able to afford it.

Curry could be on the lookout for JK7 Rejuvenating Serum, the world’s #1 anti-aging serum, in less than a minute. That would explain why the “baby-faced assassin” has never seemed to mature. He could certainly buy out the whole corporation and appear youthful forever by the time he is 37.

They must be envious of working adolescents. Curry earns in a minute what other teenagers save for years in order to purchase a new automobile. Some of the most costly pairs of jeans in fashion are $10,000. He could shoot one three-pointer and then place an Amazon purchase in under a minute.

Curry could go to Chicago Cut and have one of the nicest steak meals he’s ever had for a split second on the court. Purchase a first-class aircraft ticket and travel throughout the United States. He could buy a suite at a beautiful hotel the following second. In a couple of seconds, you can organize a holiday.

For $228, what else can you get? Shopping for the week? What about your utility, water, and Internet bills? Overall, this arrangement is quite profitable. When you’re one of the finest in the world, things like this happen.

During the 2021-2022 season, Curry earned a total of $254 million. Curry will earn $215 million over the following four years. That means he’ll earn about $470 million by the time his second deal is over. If he takes care of his body and avoids injuries, he might earn up to $500 million by the time he retires from basketball.

Kevin Garnett was once the highest-paid NBA player of all time when he made over $343 million in 21 seasons. If you adjusted that to inflation, it would be about $448 million. Even with inflation, Curry is going to blow that out of the water when he retires. Players like Curry and Giannis Antetokounmpo will pave the way for more supermax contracts and even higher Earnings Potential down the line.

Courtseat/Instagram is to thank for the concept.

Steph Curry is the most expensive NBA player for the 2022-23 season, while Russell Westbrook and John Wall are in the top four.

Kobe Bryant holds the record for most points per game at 18 years old, Michael Jordan at 34 years old, and LeBron James at 37 years old.

The “klay thompson contract” is the new contract for Stephen Curry. The Warriors superstar is earning $13,681 per minute.