Bradley Beal is a free agent this summer, and the Wizards have their work cut out for them if they want to keep him. With five destinations in mind as possible landing spots for Bradley, here’s how much money he could pull down along with what kind of title (if any) can be expected at each destination.

Bradley Beal has been a topic of discussion this summer. The Wizards have offered him a $241.6M extension, but he wants to be traded to the Lakers. He also may not want a title or money, but it is still unclear what his intentions are. 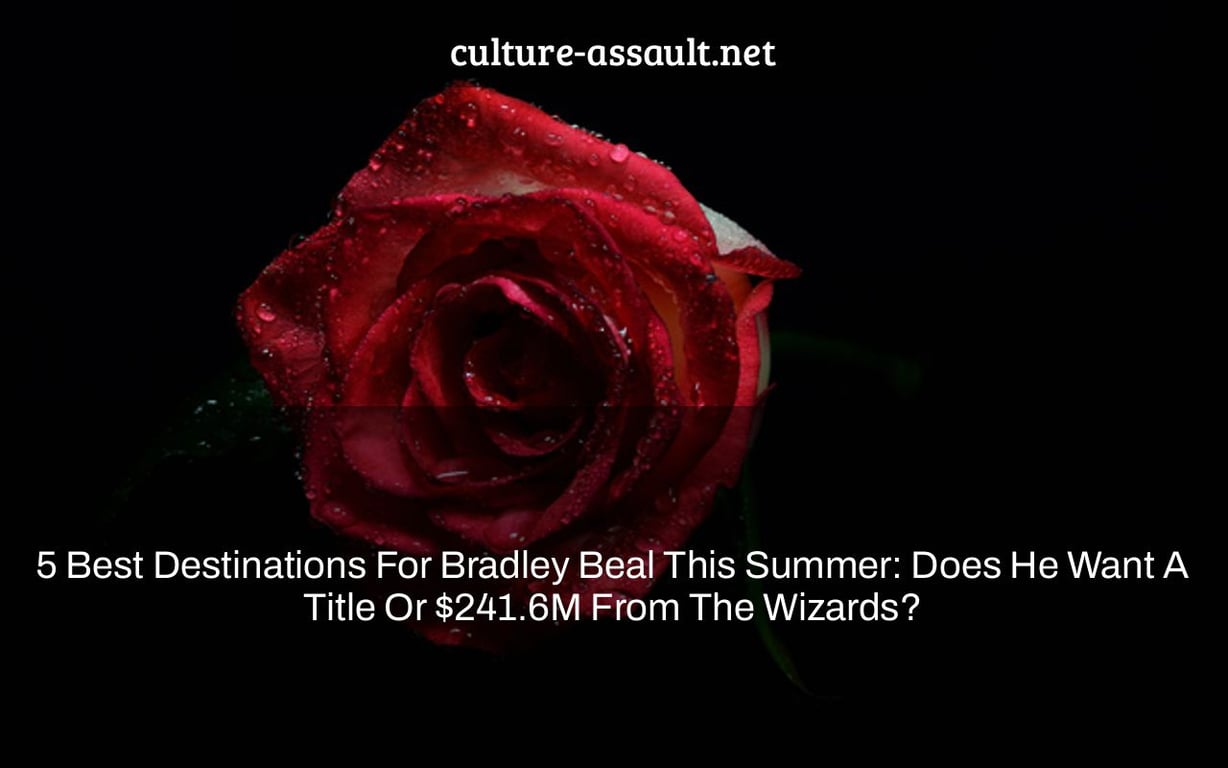 Bradley Beal is one of the NBA’s most gifted shooting guards right now since he’s an offensive machine capable of averaging at least 30 points per game in a season. Beal has worked on his game to add a substantially better ability to generate his own shot and also lead the attack with his playmaking. He started out as a spot-up shooter who benefited from John Wall’s playmaking in Washington.

The three-time NBA All-Star has created a name for himself in recent years and will be a free agency this summer. His two-year contract with the Wizards has expired, and there has been much speculation about where the All-Star should go. Although he has claimed on several times that he is pleased in D.C., Bradley Beal may no longer want to carry a poor team on his shoulders and may be seeking elsewhere. After all, throughout the season, the Bulls acquired former All-Star Kristaps Porzingis.

However, Wizards supporters are still holding their breath, since losing Beal would effectively eliminate the team’s prospects of making the playoffs in the near future. He has to make a choice. Is he more interested in signing a 5-year, $241.6 million deal with the Wizards or signing with a contender and chasing a title later?

While we won’t know for sure whether Beal is in it for the long haul, we can expect him to look at free agency with the goal of finding the best possible fit for him on the floor. As he approaches 29, these are the top five summer destinations for the three-time All-Star shooting guard, four of which may offer sign-and-trade agreements.

Many NBA fans believe that the Knicks should blow it up after a season of bad performance and inconsistency from Julius Randle and his teammates. Rather than punishing Randle for a subpar season, making modifications and giving him an All-Star perimeter player might be the trick. Bradley Beal, a three-time All-Star, might be the solution.

Because he can run his own offense and carry the ball up the court, Beal might be crucial to the Knicks getting back into the playoffs. A Beal-Randle tandem would almost probably be enough to get the Knicks back into the East race, since a little-big man scoring duo has traditionally been a terrific thing. Most importantly, New York needs a reliable scorer who can easily average over 25 points each game.

With a nucleus of Randle, RJ Barrett, and even Cam Redish, New York is on to something, but they need a true All-Star to round out the roster. Since Carmelo Anthony, the Knicks have lacked a go-to scorer capable of averaging at least 25 points per game, and the NBA is a better place when New York has an offensive great capable of taking over games. Washington may have to accept a rebuilding deal that includes three first-round selections and Obi Toppin, a promising big man.

Despite the fact that superstar Nikola Jokic has earned his second consecutive MVP award, Denver has yet to return to the Western Conference Finals, like they did in 2020. The injuries to Jamal Murray and Michael Porter Jr, of course, have been the main reasons for this, since Denver is essentially a one-man show. Jokic is a unique talent, and at 27 years old, he still has plenty of time to lead the Nuggets to the promised land. He simply needs a little help from his friends.

In reality, Bradley Beal, a superb scorer who can not only span the floor but also create his own offense with Jokic and Jamal Murray, might be the answer to Denver’s championship prayers. Despite being a score-first guard with outstanding handling and scoring ability, Beal is not seen as a selfish player and will feed Jokic and share the ball with Murray. Beal is approaching 29 years old, indicating that the Nuggets want to sign him for the long haul.

Losing Michael Porter Jr won’t be a huge loss since the youngster is likely to stay injured for the rest of his career. While supporting players Will Barton and Monte Morris have been terrific servants, the promising young player may be a loss worth accepting for Denver. Denver might be aiming to stack the deck in their favor by forming a highly powerful offensive Big Three in the West by adding two first-round choices.

Is it necessary for the Miami Heat to make changes? During the regular season, they finished first in the Eastern Conference and are presently in a fight with the Philadelphia 76ers, who are led by Joel Embiid and James Harden. If Miami can go past Philadelphia two years after reaching the NBA Finals, they might be in the mix to return to the NBA Finals. However, Miami is not one to rest on its laurels.

Bradley Beal would elevate Miami’s offense since he is now a superior all-around player than Tyler Herro. Herro has been outstanding all season, earning Sixth Man of the Year and establishing himself as the team’s third-most essential player after Jimmy Butler and Bam Adebayo. However, Herro’s productivity might be due to his desire for a max deal, and we’ve seen players calm down after signing one in the past. Rather of risking it, the Heat could deal Herro with two secondary players and a draft selection for a true All-Star.

Bradley Beal has averaged over 30 points per game twice in the previous three years, so Miami will know what to expect. Because they compliment each other on both ends of the court, his combo with Jimmy Butler will be dominating in the East. Bradley also joins one of the finest East-coast trios in the NBA, and Miami may secure a top-three spot in the conference for at least the next three seasons. If Miami can make the NBA Finals as is this year, pursuing Beal may be the deciding factor.

Bradley Beal would be a terrific match for the Cleveland Cavaliers, apart from re-signing with Washington and attempting to establish himself as one of the best Wizards players ever. The Cavaliers are an up-and-coming squad because to the enthusiasm they bring to the court and the promise that players like Darius Garland, Evan Mobley, Caris LeVert, and Isaak Okoro have showed. Cleveland may bring in another scoring force in Beal if they are prepared to part ways with Collin Sexton and All-Star Jarrett Allen in a sign-and-trade deal.

While the Cavaliers concentrate on Evan Mobley’s development over Jarrett Allen, a lineup featuring Garland, Beal, and Mobley would be tough to defend. Cleveland failed to make the playoffs this season, and they were without a go-to scorer in his prime who has experience in the trenches. Beal has been to the playoffs many times while playing with the Washington Wizards in the Eastern Conference. Arriving in Cleveland allows him to be the team’s leader while being surrounded by young men eager to compete.

If Beal can continue to do what he does best, which is score the ball at a high level, he can assist in the development of two other future superstar players as well as some other fascinating talent on a team looking to improve its standings. Beal can span the floor nearly as effectively as Cleveland’s shooters, and his desire to be selfless is another significant reason why leading and playing with the Cavaliers’ talents will help him immensely. The Wizards are acquiring two rebuilding components under the age of 25 as well as a strong collection of choices.

Fans of the Washington Wizards will be hoping and praying that their franchise player returns. Even though the team struggled terribly this season with and without Beal, they cannot afford to lose another franchise player after John Wall went down with injuries and was then traded for Russell Westbrook on a one-year rental. The Wizards have little chance of ascending the East without Beal performing at the All-Star level he has demonstrated in recent years.

Over the previous five years, Beal has made three All-Star teams with the Wizards, giving him his first genuine shot to become a perennial All-Star in the NBA. He’s scored more than 25 points per game three times in his career, including a career-high 31.3 points per game last season on 48.5 percent shooting from the field and 34.9 percent from three. Beal is projected to keep putting up similar numbers in the future.

Unlike the majority of today’s NBA players, Bradley Beal may be willing to sign a long-term contract with the Wizards this summer and return to the organization that drafted him No. 3 overall in 2012. If Beal remains, the Wizards can keep adding to their roster by making everyone disposable. If Kristaps Porzingis can regain his All-Star form, he may be an intriguing acquisition, but as long as they have Beal, they can keep things interesting in the Eastern Conference.

Zach LaVine’s Top 5 Summer Vacation Spots: The Chicago Bulls must pay him the maximum contract or he will go.

Ben Simmons and Trae Young might team up in a proposed trade, according to NBA rumors.

In the offseason, the Golden State Warriors may want to trade Andrew Wiggins for Rudy Gobert: The Warriors might once again be a Super Team.

An NBA insider reveals the Lakers’ ideal strategy for the next season: Buddy Hield And Malcolm Brogdon Nick Nurse and Sam Presti join the Lakers in support of Russell Westbrook.

Bradley Beal is a professional basketball player for the Washington Wizards. He has been in the league since he was drafted in 2012, and this summer he’s going to be looking for a new contract. What will Bradley want? A title or $241.6M from the Wizards? Reference: bradley beal stats.